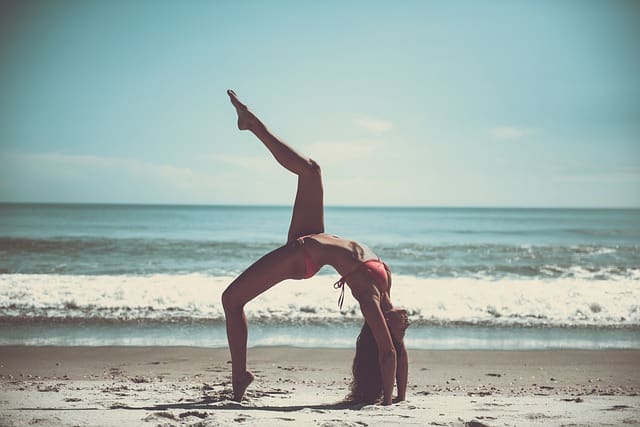 Along with that, the glute bridge is one of the best posterior chain exercises, which means it is amazing for sculpting your backside and preventing back injuries. Keep reading below to learn more!

If your goal is to lift heavier weights on the back squat or deadlift exercise, mastering the glute bridge and various glute bridge variations can significantly help  you. For example, according to a research study conducted at Southern Utah University,

“Both Glute Bridge Variations (GBV) and Supine Leg Curls (SLC) groups showed a significant positive improvement in Back Squat (BS) 3RM within their respective groups. However, findings suggest that the GBV exercise implemented in a standardized Resistance Training (RT) program provides a greater benefit with regard to improving lower body power production than a standardized RT program that includes SLCs”

If you are an athlete playing a sport such as basketball (like myself), soccer, football, baseball, or nearly any other sport, glute bridges can help improve your performance and keep your legs healthy. As stated by a study published in the Strength & Conditioning Journal,

“In addition to activating the posterior musculature of the hip, single-leg glute bridges require stabilization of both the hip abductors and core muscles through isometric contraction. Because strong gluteal and hamstring muscle groups are imperative in lateral stabilization and explosive linear movement, the single-leg glute bridge is beneficial to the general population and athletes in a variety of sports, such as soccer, football, and rugby.”

Here are the best glute bridge variations that you should do once you have mastered the traditional glute bridge:

Once you have mastered the traditional glute bridge exercise, the next variation you should try is the single-leg glute bridge. This variation is slightly more difficult, but it is great because it will treat imbalances between each of your legs.

If one of your legs is stronger than the other, doing single-leg glute bridges will help even them out!

Once you have mastered both the traditional and single-leg glute bridge, the next step is to try some more advanced glute bridge variations. For example, this physioball glute bridge with an in and out motion.

This is a great way to “bulletproof” your hamstrings!