Soda Tax Pros and Cons – Would a Soda Tax Work in America? 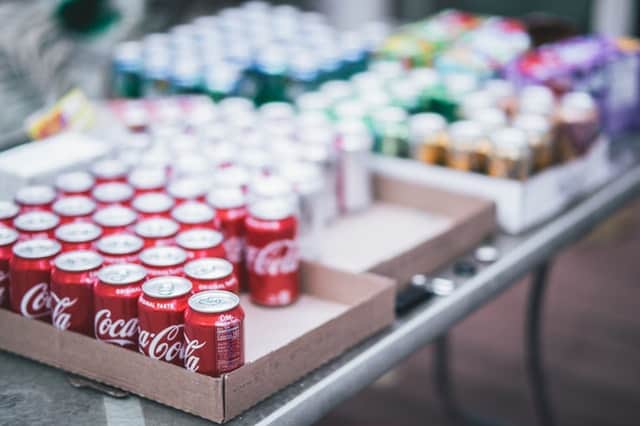 Table of Contents hide
How is Soda Consumption Related to a Risk of Obesity?
Would a Soda Tax Decrease Soda Consumption?
What is the Most Effective Way to Tax Soda or Sugar-Sweetened Beverages?
Does a Soda Tax Invoke a “Nanny” State?
Concluding Thoughts – Is a Soda Tax a Viable Public Policy?
References

The concept of a “soda tax” may seem as un-American of a public policy as can exist, considering America was essentially founded due to a disagreement over a beverage tax. However, there are several reasons why implementing a soda tax is a responsible public policy that does not constitute government overreach into the American free-market.

In fact, a soda tax corrects an imbalance created by other U.S. government subsidies that allow soda to be sold to consumers at a disproportionately low price.

The primary reason a soda tax is necessary for the United States is due to the correlation between soda consumption (more broadly categorized as sugar-sweetened beverage consumption) and obesity.

Implementing a nation-wide soda tax is one of the most realistic, efficient, and effective ways that a single public policy could be instituted to improve the health of people living in the United States while not out-right restricting certain foods, drinks, and habits that lead to obesity because it targets one of the single most destructive nutrition choices- the consumption of sugar-sweetened beverages (SSBs).

Although there are objections to implementing a soda tax concerning government-overreach and free-market values, it is a logical and effective public policy measure that has cost-benefits for the United States government and will rapidly improve the overall health of the United States population.

How is Soda Consumption Related to a Risk of Obesity?

Obesity in the United States is an epidemic, and public policy measures that target obesity are necessary to control this issue before the burden completely overwhelms American society.

Soda consumption is related to an increased risk of obesity is because it is a low-nutrient, high-calorie form of calories. The average can of soda contains approximately 150 calories, and the majority of the calories come directly from added sugar or high-fructose corn syrup (HSPH, 2019).

Not only does soda provide a simple way to intake high-amounts of low-nutrient calories rapidly, but there are other pathways that sugar-sweetened beverages increase the risk of obesity (Stanhope et al., 2018).

Additionally, soda consumption is associated with an increased likelihood of fast food consumption, which is another source of non-nutrient dense calories correlated with obesity (Zagorsky & Smith, 2017).

Reducing soda consumption among United States citizens would decrease the risk of having more people develop obesity and help prevent the continuation of the United States obesity epidemic.

As it has been modeled throughout the world, a simple way to decrease soda consumption and reduce the risk of obesity is by implementing a tiered “soda tax” based on the amount of added sugar in sugar-sweetened beverages.

In October of 2016, the World Health Organization recommended that governments begin to tax sugary drinks by at least 20% to reduce the growing prevalence of obesity throughout the world (Gostin, 2017). However, soda taxes have been implemented even before this recommendation, and they have continued to show impressive results.

In 2014, Mexico instituted a tax of 1 Mexican peso per liter (approximately 5.5 U.S. cents at the time) for all beverages with added sugar, which resulted in a decrease of 7.3% per capita sales of sugar-sweetened beverages and a 5.2% increase on SSBs of per capita sales of water (Colchero et al., 2016). The sugar-sweetened beverage tax in Mexico also altered spending on SSBs of lower-income households, residents living in urban areas, and families with children more (Colchero et al., 2017).

There are also other ways that a soda tax would reduce sugar consumption from SSBs. For example, in 2017, Portugal implemented a 0.08 euros per liter tax for drinks that contain less than 80 grams of sugar per liter, and a 0.16 euros tax per liter for drinks that contain 80 grams or more sugar per liter, plus VAT, which mainly resulted in reduced added sugar content from manufacturers that wanted to avoid the tax, which still reduced overall sugar consumption by consumers (Gonçalves & Pereira dos Santos, 2020).

In Philadelphia, a 1.5 cent-per-ounce tax on SSBs was passed, and revenue generated by the city from the tax was spent to develop pre-kindergarten programs, which further reduces SSB consumption due to improving socioeconomic status (Langellier et al., 2017).

Implementing a soda tax would provide several means of reducing sugar consumption and would make a significant step toward reducing the obesity epidemic in the United States.

What is the Most Effective Way to Tax Soda or Sugar-Sweetened Beverages?

The most effective way to reduce SSB consumption through a “soda tax” is to implement a tax that will be passed down to the consumer. It has been indicated that sales of SSBs decrease as the taxed beverage price increases (Bleich et al., 2020).

Numerous studies have indicated that there should be at least a 20% tax placed on the price of sugar-sweetened beverages for a soda tax to be effective. However, a tiered soda-tax would be significantly more effective for several reasons.

For starters, a tiered tax based on sugar content will not only reduce the consumption of sugary drinks by decreasing the affordability of sugary drinks, but it will incentivize manufacturers to reformulate SSBs so that they contain less sugar or to produce new, unsweetened beverages (Falbe, 2020).

The United Kingdom has decreased total sugar sales with their tiered SSB tax almost 30% from 2015-2020, and it is mostly due to manufacturer reformulation (Falbe, 2020).

Implementing a tiered soda tax would provide grounds for manufacturers to alter their products to contain less total sugar while also reducing the affordability of higher-sugar containing SSBs.

Does a Soda Tax Invoke a “Nanny” State?

There are several opposing views to soda taxes, and in the United States, the primary opposing view is that specific taxes for sugar-sweetened beverages step too far into the “Nanny” state, where the government controls free will and choice.

However, that viewpoint is countered by the role that the United States government currently plays in subsidizing the growing of corn that is used for high-fructose corn syrup production and the costs of Medicaid and Medicare-related to obesity.

In the United States, farmers do not receive government protection for growing “specialty crops” such as most fruits and vegetables but receive large subsidies for growing corn, which promotes the production of enormous amounts of high fructose corn syrup that allows the price of sweetened beverages to remain very low (Franck et al., 2013).

Although restructuring crop subsidies may also reduce the production and consumption of SSBs, a soda tax is a more direct method of combatting the use of cheap, subsidized corn for high-sugar beverages.

Additionally, in 2006, 8.5 percent of Medicare and 11.8 percent of Medicaid spending was due to obesity-related health problems (HSPH, 2016). Since Medicaid and Medicare are both government-funded healthcare institutions, it would also be in the best interest of the public and the government itself to reduce healthcare spending as much as possible.

Considering the relationship between SSB intake and obesity, it is easy to see that lowering SSB intake would reduce the tax burden associated with Medicaid and Medicare spending.

Although United States Libertarians and Conservatives would most likely reject the notion of government intervention into specific choices of consumer consumption, there is an overwhelming body of evidence that SSB consumption directly leads to increased health risks, and the price of SSB consumption is already paid for by the taxpayer and government in multiple ways.

Therefore, a soda tax would effectively reduce the “Nanny” state by reducing the government’s role in funding corn production for high-fructose corn syrup and reducing the costs associated with Medicaid and Medicare.

Concluding Thoughts – Is a Soda Tax a Viable Public Policy?

A tax on sugar-sweetened beverages using a tiered-tax method would decrease consumption of SSBs and reduce the risk of obesity, proving to be an effective public policy measure. Soda and SSB intake is strongly correlated with an increased risk of obesity, and numerous examples of soda tax reducing the overall consumption of SSB and total added sugar from beverages are already available.

When assessing the value of a soda or SSB tax, it is important to understand that the food and beverage industry will combat the tax and likely refer to the tax as an extension of the “Nanny” state and an overreach of government intervention in the free will of consumers (Carriedo et al., 2020).

However, a tax on SSBs would reduce overall government intervention in consumers’ lives in multiple ways.

The tax revenue could also be used to fund additional programs that promote socioeconomic equality and nutrition education, leading to further improved health markers over time. For these reasons, a soda tax is a logical and viable public policy.