Benefits of Drinking Red Wine Before Bed – Facts to Know

Alcohol consumption is a widely debated topic amongst nutritionists and dietitians, but generally speaking, drinking red wine before bed is a healthy way to consume alcohol and it can certainly fit into a healthy diet.

I was never much of a wine drinker until my first year in professional basketball when I was living in Macedonia. The town I lived in was famous for grapes, and drinking wine was a regular part of life.

After living there for a few months and researching the history and science of wine consumption, it became clear to me that drinking red wine could absolutely fit into a healthy diet plan, and drinking red wine has a few unique health benefits that you won’t obtain elsewhere.

However, there is still some debate about the health benefits of drinking wine before bed or drinking alcohol at all, which I will happily explain to you below!

If you are considering drinking red wine before bed, it is important that you understand resveratrol- the compound responsible for most of the health benefits of red wine.

Resveratrol most notably comes from grapes, and it is mainly concentrated in their “peel.” Due to this, the highest concentrations of resveratrol are found in red wines, because red wines are produced from the fermentation of juice together with fruit skins.

Although drinking red wine has other health benefits that do not pertain to resveratrol, resveratrol is the most important compound of red wine because it is a very effective antioxidant and non-toxic fungicide (anti-fungal).

In fact, resveratrol supplements have shown specific health benefits as well. For example, according to a study produced in Cell Metabolism,

Furthermore, as stated by a study published in Nutrition Research,

“oral supplementation of resveratrol is thus found to be effective in improving glycemic control and may possibly provide a potential adjuvant for the treatment and management of diabetes.”

Here is a great resveratrol supplement: 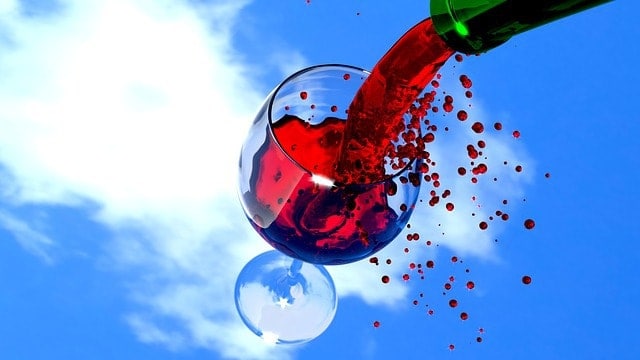 If you are drinking red wine before bed for health benefits, moderation is the key. For men, two glasses of red wine per night is the maximum. For women, one glass is the perfect amount.

If you consume more than this, you are going to begin producing negative effects for your health, instead of positive effects.

Aside from what I have already mentioned about resveratrol, here are a few additional health benefits of drinking red wine before bed:

Research has shown that people who drink a glass of wine a day tend to live much longer and have healthier lives.

According to the Journal of Cardiovascular Pharmacology,

“wine was also found to increase lifespan by inducing longevity genes. It appears that resveratrol and proanthocyanidins, especially resveratrol, present in grapes and wines play a crucial role in cardioprotective abilities of grapes and wines.”

Additionally, as stated by a study produced by the American College of Cardiology,

“light and moderate alcohol intake might have a protective effect on all-cause and CVD-specific mortality in US adults.”

When consumed in the moderate doses I suggested above, red wine can help promote a healthy heart and help you live a longer and healthier life!

While the verdict is still out regarding scientific conclusiveness, studies do show that red wine may reduce hardening of the arteries (atherosclerosis) and other issues pertaining to high blood pressure.

As stated by a study produced in Circulation Research,

One of the main reasons for this is because red wine promotes blood circulation and blood health, easing stress on the heart.

Red wine also has significant effects on cholesterol, another way in which red wine benefits the heart.  These two factors indicate that red wine has positive effects on your heart!

Furthermore, moderate drinking reduces blood pressure, clears fat from the arteries, and reduces the tendency of blood to clot. These, in turn, reduce the chances of a heart attack or heart disease.

According to a study published by The British Medical Journal,

Several studies confirm that drinking red wine before going to bed can help you lose weight. Although I wouldn’t necessarily consider it a weight loss hack, Harvard University did conduct research for 13 years to confirm the effect of red wine on weight.

The research conducted on 20,000 women confirmed that women who drank up to two glasses of wine a day were less likely to be obese. As stated in the study,

“Compared with nondrinkers, initially normal-weight women who consumed a light to moderate amount of alcohol gained less weight and had a lower risk of becoming overweight and/or obese during 12.9 years of follow-up.”

Again, it is important to follow the rule of moderation. However, if you drink red wine moderately, it can help you lose weight!

Drinking alcohol can actually help to remove any clogs in the vessel carrying blood to the brain, thereby preventing ischemic stroke. According to a study published in the journal Stroke,

“Moderate alcohol consumption is associated with decreased risk of IS in a multiethnic population. This effect is independent of other risk factors and holds for nonatherosclerotic stroke subtypes.”

As stated by a study published by The American Journal of Medicine,

“The results suggest that low levels of alcohol consumption may have some protective effect upon the cerebral vasculature, whereas heavy consumption predisposes to both hemorrhagic and non-hemorrhagic stroke.”

However, as the study states, this is mainly a risk during heavy alcohol consumption. So, make sure you are only drinking a moderate amount of red wine each night!

Alcohol can dangerously interfere with medications. According to a study published in Diagnosis and Treatment,

Both alcohol and most medication compounds are processed by the liver, and usually, alcohol receives first preference. This slows down the efficient breakdown of medications.

So, make sure you consult your doctor about any medications you are taking to ensure there are no contradictions with alcohol consumption.

Driving under the influence is a serious offense and wine drinkers should remain constantly aware of DWI laws. However, even driving under the legal limit can have dangerous effects on driving ability.

As stated by a study published in Drug and Alcohol Review,

“Statistically significant and meaningful decrements in driving‐related performance were identified at 0.05% BAC or below in many studies.”

If you are going to drink red wine for health benefits, I suggest you do it at home or wherever your final destination for the night is, so there is no risk of drinking and driving.

As many people already know, drinking too much alcohol can result in weight gain (especially in heavy drinkers).

Alcohol slows down your metabolism and alters the breakdown of sugar in the body.

As stated by a study published in Critical Reviews in Clinical Laboratory Sciences,

“The experimental metabolic evidence suggests that the consumption of moderate amounts of alcohol has to be accounted for in the energy-balance equation and may represent a risk factor for the development of a positive energy balance and thus weight gain.”

Along with that, drinking alcohol often results in impaired judgment, and you become more likely to consume foods that are high in sugar and saturated fats.

This can affect your insulin resistance and will change how your body distributes fat.

One potential issue with a change in your insulin resistance is metabolic syndrome, which is a condition that reduces your body’s ability to consume and store energy effectively.

Belly fat, or to give it its more scientific name of visceral fat, is considered the most dangerous form of fat. It can increase your risk of developing heart disease as it has been shown to surround your internal organs.

If you are working on your body and improving your health, the best rule is to only drink red wine in moderation or stop drinking completely.

Concluding Thoughts – Should You Drink Red Wine Before Bed?

If you want to make the most out of your red wine consumption, I suggest that you finish your red wine for the night a minimum of 1 hour and 30 minutes before you go to sleep.

Although red wine contains melatonin which certainly helps you fall asleep and remain asleep, alcohol itself can have a strange effect on how you sleep, even in low doses.

By drinking your wine a little bit earlier in the night, you will avoid any negative impacts on your biorhythm and gain all of the benefits!

Naturally, anyone that has any problem drinking alcohol should not drink red wine or other alcoholic beverage. However, if you do not have any significant problem, red wine can offer incredible benefits!

Furthermore, it pays off to keep an eye on the alcohol content because not all wines are created equal. Strive to stick to organic and natural wine.

If you have never tried Macedonian red wine, try to find some and let me know what you think!

If you cannot drink alcohol or do not want to drink red wine itself, choosing resveratrol supplements is a fine option to get some of the benefits of drinking red wine before be.

For more health and fitness tips, check out Skinny2Fit, a website designed to provide you with easy access to good advice that is both simple and to the point.

Read Next: How to Lose Weight Overnight